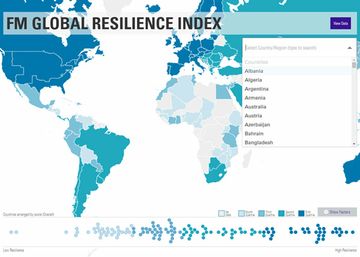 LONDON, UK—After a year of supply chain disruption, political tension and growing climate worries, resilience has become a prized commodity for global businesses, and it’s more prevalent in some places than in others. One such place is Denmark, which now tops the world in the newly released 2021 FM Global Resilience Index [www.fmglobal.co.uk/research-and-resources/tools-and-resources/resilienceindex], the definitive global ranking of countries and territories by the resilience of their business environments. The Scandinavian nation rises from third in last year’s index to its first-ever top ranking, bumping Norway, which has held the No. 1 spot in recent years, into second place.

The index is online and interactive, and the rich underlying data for 130 countries and territories can be downloaded at no cost and incorporated into a range of business processes. Produced by FM Global, one of the world’s largest commercial property insurers, the index provides a composite picture of 12 objective measures reflecting each country or territory’s economic, risk quality and supply chain conditions. The resource helps senior executives create, evaluate and manage resilient multinational businesses by making informed choices about site selection, partnerships and geographic markets.

“Historically, efficiency, speed, and profitability have often been primary considerations for global businesses,” said Andrew Bryson, operations senior vice president and manager of FM Global’s London operations. “However, the disruption that many organisations suffered in 2020 should remind leaders across the globe that the ability to recover, rebound and operate in difficult conditions should be valued equally highly. Resilience has always affected a company’s total value and events of the last 12 months have dramatically reiterated this point.”

Top-ranked Denmark is known for its quality of life, education, health care and income equality. In this year’s index, it benefits from higher resilience rankings than last year in the measures for economic productivity, fire risk quality and oil intensity (signifying increased vulnerability to oil shock). Norway and Luxembourg round out the top three countries in overall business resilience, with Western Europe taking 9 of the top 10 places. The Central United States is the lone exception, occupying ninth place as it did last year.

Ukraine is the index’s biggest riser, soaring from 84 to 63 based on improved resilience rankings in multiple measures, including productivity, oil intensity, natural hazard exposure, inherent cyber risk and control of corruption.

The biggest faller is Oman, sinking from 57 to 69 because of steep drops in economic productivity and oil intensity. The drop would have been even larger if not for an improved ranking in natural hazard exposure due to new, more incisive data incorporated into the index relating to earthquake risk.

The United Kingdom re-entered the index’s top 10 (now ranked 10 in overall resilience, up from 13 in 2020’s index), driven primarily by an easing of political risk, reflecting in part the election of a government with a large majority and the political stability this brings.

The United States region 1 (the East and Southeast) fell from 10 to 17 in this year’s index, reflecting two changes: a drop in the region’s natural hazard exposure ranking of nine places due to the new earthquake risk data; and a falling political risk ranking for the country as a whole (from 41 down to 50). The latter shift may reflect partisan acrimony and heightened conflict over social justice issues.

FM Global has noted growing concerns among global companies over risks related to the changing climate. Companies have contended with severe floods, droughts, wildfires, precipitation and windstorms around the world – for example, the disruption caused by Storm Christoph in the UK earlier this year.

Natural hazard exposure is one of several climate-related resilience measures in the index, and a frequent contributor to that exposure is flood risk – among the changing climate’s most tangible threats. A related index measure is natural hazard risk quality, a reflection of how well countries are mitigating their exposure to natural hazards. A third index measure with climate risk implications is urbanization rate. The faster a region’s urbanization, the more business property and value is in harm’s way during any given climate-related event. Finally, the quality of [transport and utilities] infrastructure provides important clues about a country’s prospective response to extreme conditions.

“Climate risk is certainly one factor that encourages companies and leaders to consult the index when making strategic decisions,” said Bryson. “Wherever a company is based, resilience has a tangible benefit, contributing to the goals of preserving revenue, market share, growth opportunities and total enterprise value.”

Established nearly 200 years ago, FM Global is a mutual insurance company whose capital, scientific research capability and engineering expertise are solely dedicated to property risk management and the resilience of its client-owners. These owners, who share the belief that the majority of property loss is preventable, represent many of the world’s largest organisations, including one of every three Fortune 1000 companies. They work with FM Global to better understand the hazards that can impact their business continuity in order to make cost-effective risk management decisions, combining property loss prevention with insurance protection.

Our media relations team is available to assist members of the media with questions regarding FM Global.
Connect Now